REMINDER: Context is key; this information should be taken as broad strokes on a subject that can vary based on creative intent. Please read “2D LED In-Camera VFX Field Guide Overview” for context on where the information presented here comes from and is intended for.

When talking about the necessary infrastructure and equipment needed on set to successfully shoot an LED wall-based virtual production setup, the list of possible combinations and building blocks becomes infinite. This workflow / technical specification aims to break down the equipment required into distinct parts, build relationships between them, and help our projects make better-informed decisions.
In this section, we list both the 'ideal requirement' and a 'requirement range' - i.e. the average ranges of currently existing technology. Most of the ideals land on the medium-high end of the spectrum, but as long as the goal is to achieve creative intent at a high standard of visual fidelity - they are flexible. The pipeline that takes content from a Content Playback system to the LED screens passes through multiple elements, described in the System Flow. 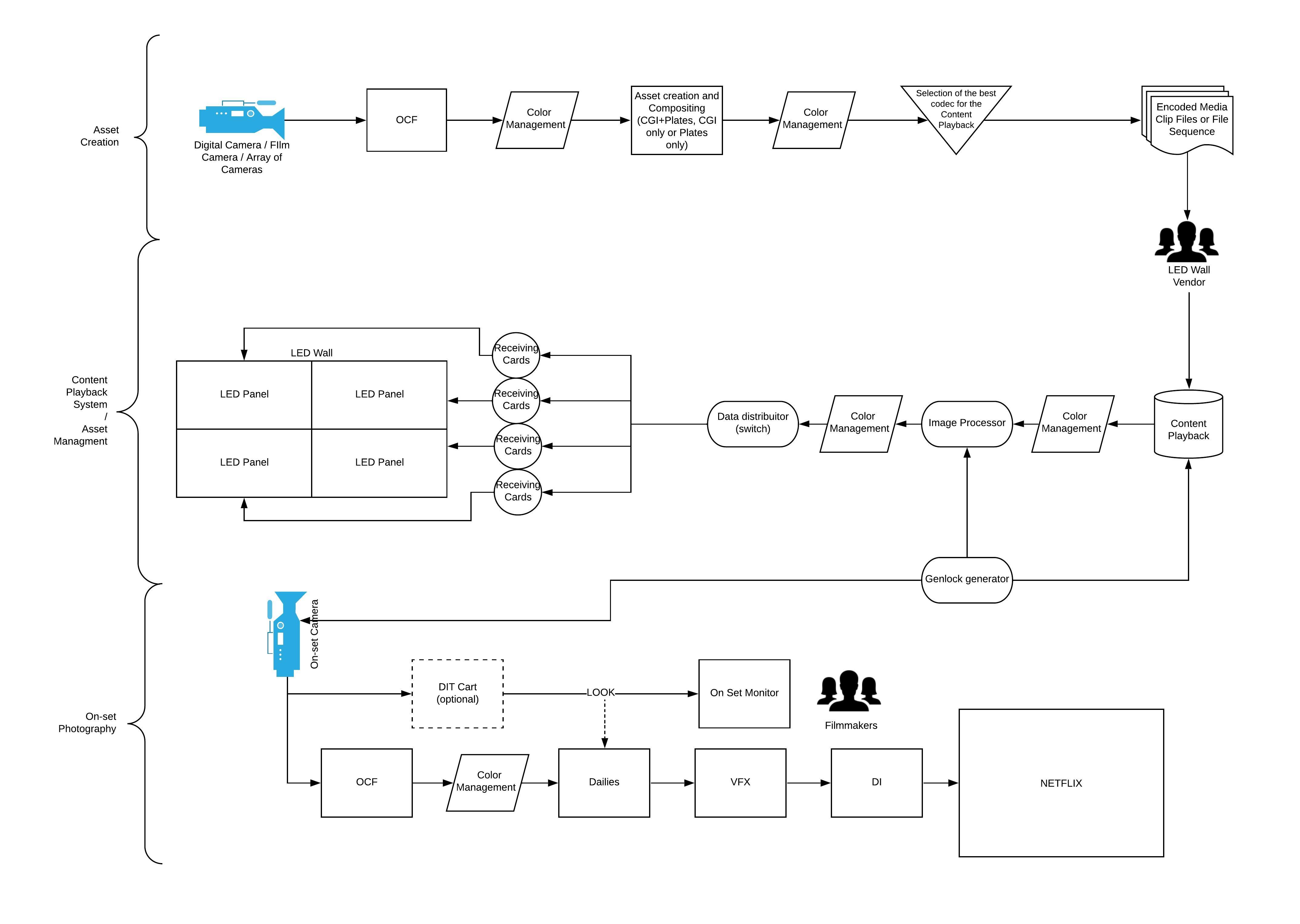 For 2D content playback on LED panel technology, a special piece of playback software is required for a couple reasons: 1) you need to arrange and map your content between panels (pixel mapping), deal with corners, ceiling, etc. and 2) you need to communicate with the LED Image Processing technology. Most of the software comes configured to work with accompanying hardware (i.e. Disguise) and sometimes a specialized playback codec (i.e. 7th Sense servers). Most Content Playback systems available these days rent with the hardware to use it. The hardware is specially configured to do one thing: play content of varying sizes to varying outputs in real-time. Remember that no ordinary computer can easily playback 4K (let alone more) in real-time for extended periods of time.

However, it shouldn’t be just about the compute power! When choosing a playback solution, consider the usability and flexibility of the software. If the software is hard to use, it won't matter how powerful the hardware is.

There are many solutions available for use in the content playback arena. As noted above, your needs will vary based on scenario. However, a few common solutions to check out to get an idea of the spectrum of options are Disguise, 7th Sense, Vioso, Hippotizer, and TouchDesigner.

The Image Processor is the element of the pipeline that adapts, interprets and translates the video feed coming from the Playback System to the required LED data distributor (commonly a network switcher) which feeds the LED panel the correct data.  In other words, the image processor plays the role of the imaging negotiator between the Content Playback System and the LED Panel. The image processor operations can vary to include scaling, color space conversions, synchronization to LED gain, white point temperature control, LED calibration and overall LED power output.

Like the rest of the technology in this space, the modular nature lends itself to both flexibility and variability. A few common solutions in the image processor space are Brompton Technology, Megapixel, NOVASTAR, Colorlight.

The LED Panel is the final element in the LED playback infrastructure. Once the content is passed through the Image Processor, the right driving instructions are sent to the LED screen so that the content can be visualized correctly. These instructions arrive as LED gain data (the power to be provided to each LED pixel on each tile of the LED wall bank) so that the content can be visualized correctly.
LED walls are made up of many individual LED panels and each tile is designed to work in conjunction (daisy-chained) with other panels, up to a specific limit. Please note that some specifications belong to the single panel, and some others express characteristics of the whole LED wall when wired together as a whole unit.

As with the playback solutions, there are many choices when it comes to LED panels. Given that this space was built mostly around panels for digital advertising or live concert venue/performance spaces, it’s important to seek out solutions that can support the needs of the film and television space, such as the ones offered by ROE, AOTO and INFILED (just to name a few.)

Was this article helpful? 31 out of 31 found this helpful