The intent of this document is to serve as a reference for configuring Davinci Resolve in an ACES color managed pipeline. This is one of the many ways in which Davinci Resolve can be configured in order to be able to deliver a Non-graded Archival Master (NAM) to Netflix .

The steps in this document are not proposed as requirements, but instead as recommended practices. The approaches described below are for an ACES Workflow, but do not cover all possibilities for a Resolve Color Managed workflow.

Blackmagic supported the creation of the following tutorials to offer guidance in the area of color management:

If you are interested in learning more about ACES, please visit this thread on ACES central for more information on the Academy Color Encoding System.

For more information about the ACES implementation in Davinci Resolve, please go to the ‘Color Management using ACES’ chapter in the “The Data Levels, Color Management, and ACES” section of the latest DaVinci Resolve Manual.

Once you create a new project, go to the Project Settings > Color Management panel. The first thing you will want to change is the Color Science settings to ACEScct. If you don’t have a specific reason to use ACEScc, it is recommended to use ACEScct.

Set your ACES Output Device Transform to match the calibration and capacities of your video display:

An important note is that when the ACES Output Device Transform is set to None, Resolve will output ACES images a.k.a. ACES 2065-1 or ACES Linear (AP0).

By default, for RAW clips, Resolve will automatically debayer images into ACES and you should see a normal looking image.

For non-RAW formats (such as DPX, ProRes, XAVC, etc), Resolve may not automatically detect the color space, so you will have to manually select your ACES Input Device Transform (IDT).

You can do this by right-clicking on a shot or group of shots in the Media Pool, as shown in the screenshot below.

Example: you shot XAVC on the Sony F55 using the SLog3-SGamut3.CINE color space, and bring these clips into the Media Pool. Resolve is not able to recognize this based on the metadata, so you must manually select “Sony SLog3 SGamut3CINE” from the ACES Input Device Transform dropdown list. 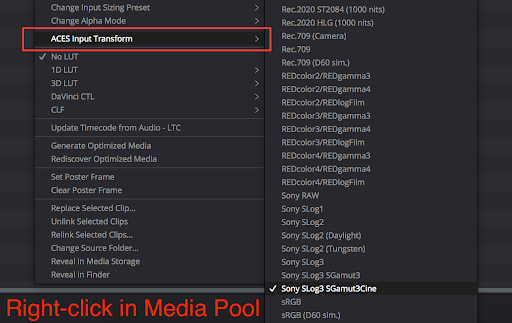 You may also set your Project to default to a specific ACES Input Device Transform. This may be handy if the majority of your clips will be in a common color space and cannot be auto-detected.

TIP: Sorting your Media Pool by “Format” or “Video Codec” columns can help batch-assign IDTs to groups of clips highlighted at one time. See screenshot below for an example. 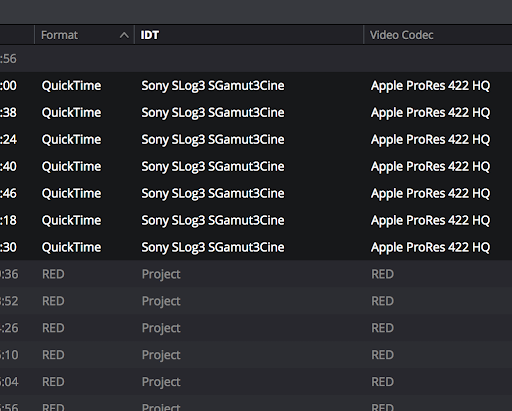 When you are ready to render your deliverables, open up the Deliver page.

When rendering images in display color spaces, such as those required for IMF Master deliverables, a VDM source for IMF creation, or Quicktime references, make sure your ACES Output Transform is enabled and matches the intended display type.

For the Non-Graded Archival Master (NAM), make sure you turn off the ACES Output Transform in order to output ACES AP0/Linear data as shown below.

NOTE: For any interchange of images between facilities or softwares in an ACES pipeline, such as VFX plates, the following method should be used.

To disable the grade for your NAM render, the Enable Flat Pass option on the Deliver page can be used. See screenshot from the DaVinci Resolve Manual below.

Ensure you have the following render settings: 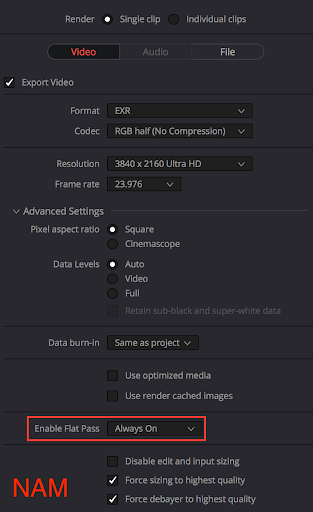 NOTE: The setting ‘Force debayer to highest quality’  will automatically select what Resolve considers to be the highest debayering quality for each RAW file on the timeline. This may differ from your own findings. Please feel free to select your preferred debayering algorithm instead, and untick this option if you prefer.

Note: Resolution may vary depending on the project’s framing, but should be at UHD resolution (3840 x 2160) or higher.

1  Since the ACES color space is Linear, the ACEScct and ACEScc spaces were defined as logarithmic (log) working color spaces, so that traditional color correction tools would feel similar to other log color spaces.

2  Rec.2020 is not used for Netflix deliveries at this time.

Was this article helpful? 175 out of 182 found this helpful